Written by Walter Schreppers on Well this game we wrote way back around 1998. Today there is a great emulator called <a href="http://dosbox.sourceforge.net">dosbox</a> which also has Mac OS X binaries. So I resurrected the first game I ever wrote together with Anthony Liekens. We called it arkapong since it is a crossover between Arkanoid and Pong :). The cewl thing is that the game executable is 17K including all gfx, font etc. That is smaller than the screenshots in bytesize !.

Here is a screenshot: 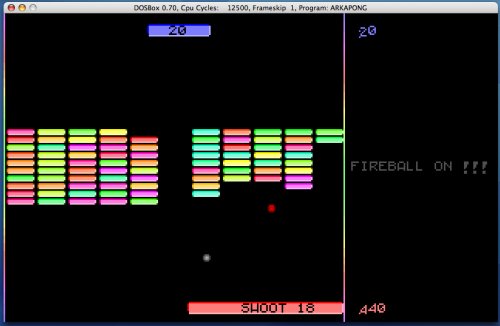 And here is a page with more screenshots and a package which contains a tuned dosbox mac os x package and the game all in one : ArkaPong page