Projects worked on for Playpass NV

Around October 2012 I was still working for Option NV but an old friend 'Dale Hofkens' which I knew from my student days and the many hacker conferences we visited together in the past (HAR in holland, CCC in Germany etc.) showed up at my front door. He explained how he didn't finish university but instead landed a new job as CTO for PlayPass.

They we're a small startup in Antwerp with 3 developers and 1 manager but they had landed big contracts for the crew and crowd software of some of the biggest Music Festivals in Belgium. They we're going to use RFID to track festival visitors and had loads of new software to write and also had a big rewrite to be done on a large part of their existing web platform.

Playpass'es initial software stack was php based and had turned into a big mess. It had been outsourced to a team of 12 developers in the past years but was crashing, they lost one of their clients Tomorrowland and thus it was super urgent to do a complete rewrite. I was excited to hear they we're going for a full rewrite in Ruby On Rails. Back then RoR was way ahead of the other web frameworks and I had introduced it myself while working at Option NV (doing some similar work, rewrote various websites from php into proper MVC/Rails webapps).

Also traffic jams Antwerp to Leuven we're getting brutal and my working days were just way too long, Playpass was located in Antwerp so it would be much more fun to get to work as well. Dale glanced with myself at all the Rails and Ruby Sinatra projects I had done in the past years at Option and was impressed. He said they would hire me immediately if I would want to join them. So I did, gave my notice at Option and a month later in november of 2012 started my adventure at PlayPass.

First big job on the table was that rewrite of the old php based platform. I checked out their current getin github repo and started implementing various features and fixing bugs. Also they did not have a staging server deployed yet. So I suggested to use one of my running servers at Hetzner to have as staging server (for running tests faster, benchmarking and optimising production deploys of the rails app and having something online to test out with a mobile phone etc.) It's even on my first invoice seen below: various bugfixes and deploys on getin.sitweb.eu, sitweb.eu being the webserver of my bvba which also does some hosting. Here is all the work done in chronological order as it was invoiced with my company SIT bvba:

So in a mere 5 months we had pretty much completed the rewrite of the crew crowd management. It still had some rough edges and needed some polishing and further style improvements. But it was fully functional and could manage all the crew teams, access control of those people and their supplies needed to build and teardown the events. Handle access control for all the festival visitors, music bands and suppliers. We even had a first small event running on the newly written system in order to identify and fix any issues before the bigger festival events were to be tackled (some dutch motorcross event).

The rewrite was working well and all editions of Werchter 2013, Graspop 2013 and many more events were managed using that Ruby On Rails rewrite. I'm sure they've further improved their getin web application and other components over the years. But I'm also sure most of the hard and critical work was already done in 2013 with that small team of 4 (Maarten, Dean, Walter and Dale). 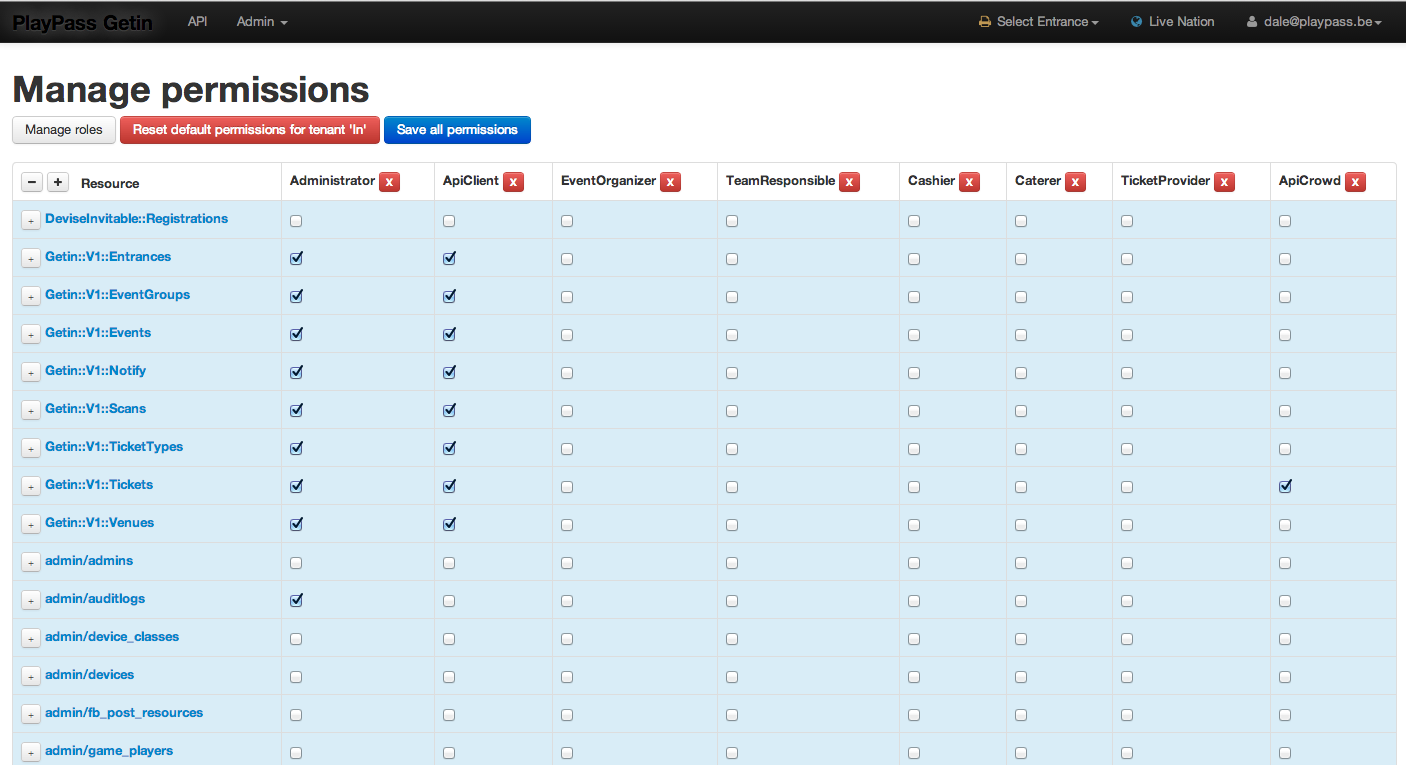 I have to dig up some old backups to get the team editing page screenshot from 2013, but rest assured it looked almost identical to the 2019 version. 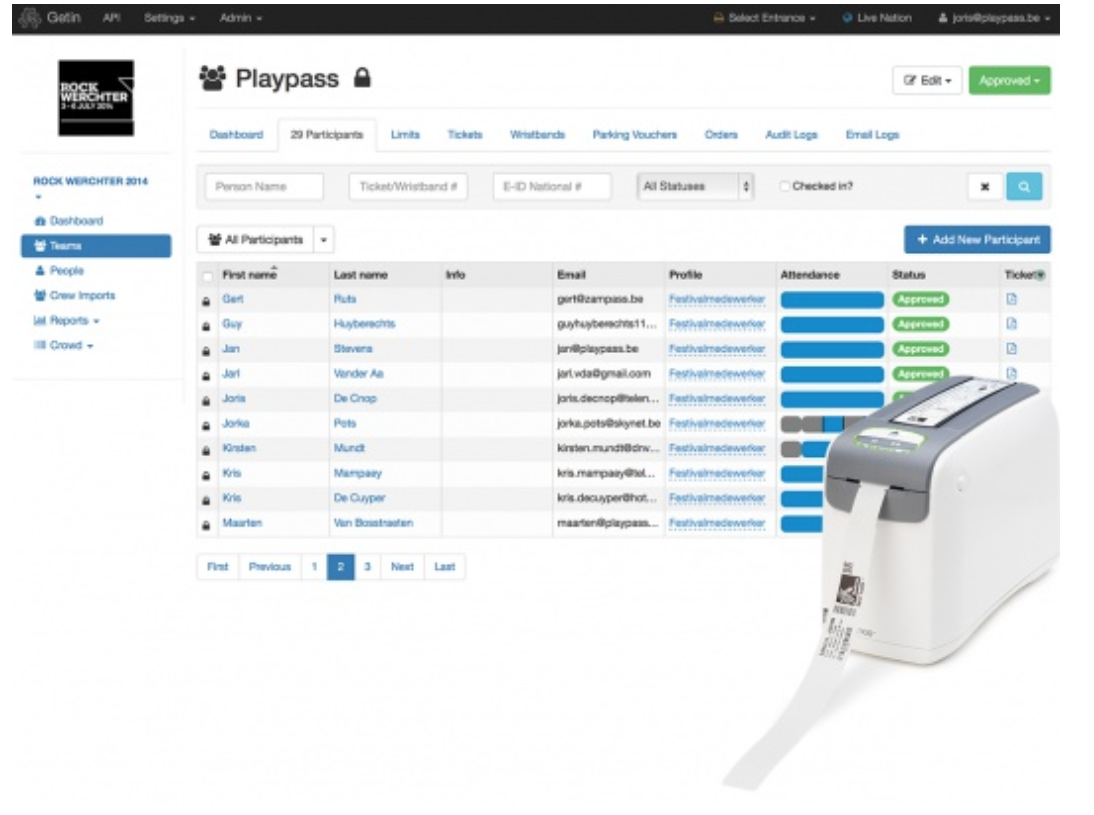 Kiosk project, later renamed to Sharepoint and then into Brand Activation and Social Media

We had rfid readers from Nordic that we wanted to deploy throughout the festival fields and do various fun things like: posting on someones facebook wall which stage he was now visiting. Giving away free goodies for people who connected their wristbands to social media. Have games like 'tombola' or 'the guessing game' also working with a touch screen and the wristband to identify yourself so you could later be selected as a winner etc.

My assignment: in a mere 4 months go from having no branding activation devices (no working hardware, no working rfid reader on the raspberry pi's and no kernel drivers available other than some generic one that needed to be altered before it could work ), no backend to orgestrate the devices in the fields. Basically a blank sheet of paper, some screenshots that were drawn to be shown regarding the tombola and other games and a short description was about all I had to work on.

After my development sprint we had a working array of IOT devices in the festival fields all connected to a json api that also talked to the api of the getin server in order to get user detail information. And from there on communicated with the facebook api's to do all the facebook features like posting on a persons wall after he played a game or visted a scanpoint in front of a stage. The server also provided all the pages to be seen on all the touchscreens. It was such a bleeding edge release that there we're even spelling mistakes on some screens that I live edited during the first day of the festival. We did have some hardware issues as well. Turns out a few days before the actual deployment in the fields someone 'optimized' a call to the readers and changed the baudrate from 9600bps into 115200bps. Luckily that was found after 2 days we turned it down to 19200bps, a bit faster than it originally was but not so fast to overheat anything.

With more time I'd probably would have been able to also get another mode of operation of the nordic reader functioning in linux and that was sence mode instead of the polling we used. However like said, it was just a time constraint thing. I read about it in the docs and saw there was an easy enough call to do under windows to switch modes but that just didn't work out of the box on the quickly cobbled together kernel module running on the the raspberry pi linux device at that time.

We ended up with a lot of raspberry pi's running raspbian. +12 touch screens unfortunately running windows which I've never deemed stable enough to run as a 'kiosk'. And also these points that posted to your facebook wall at which stage you're at as seen in the little demo video made back then (inside was also a raspberry pi controlling some leds and lights using relays over gpio lines, connected to the server implemented that handled the facebook posts and identified which user was accompanied to the given RFID chip that was being scanned. Using RFID readers reverse engineered to work on linux/raspberry pi to keep costs down. And having hand soldered all led strings controlled manually and adding gpio to relays boards and that nice green thumbs up light was also controlled in the same way over gpio. At that time it was a pretty good achievement to pull off in the limited time given. And yes I had to do it all alone. I had a few days of help from Maarten who knew everything about the readers under Windows Mobile but also didn't know how to get it running under linux. And Dale+Dean were full time busy improving and further styling the Getin site from above. 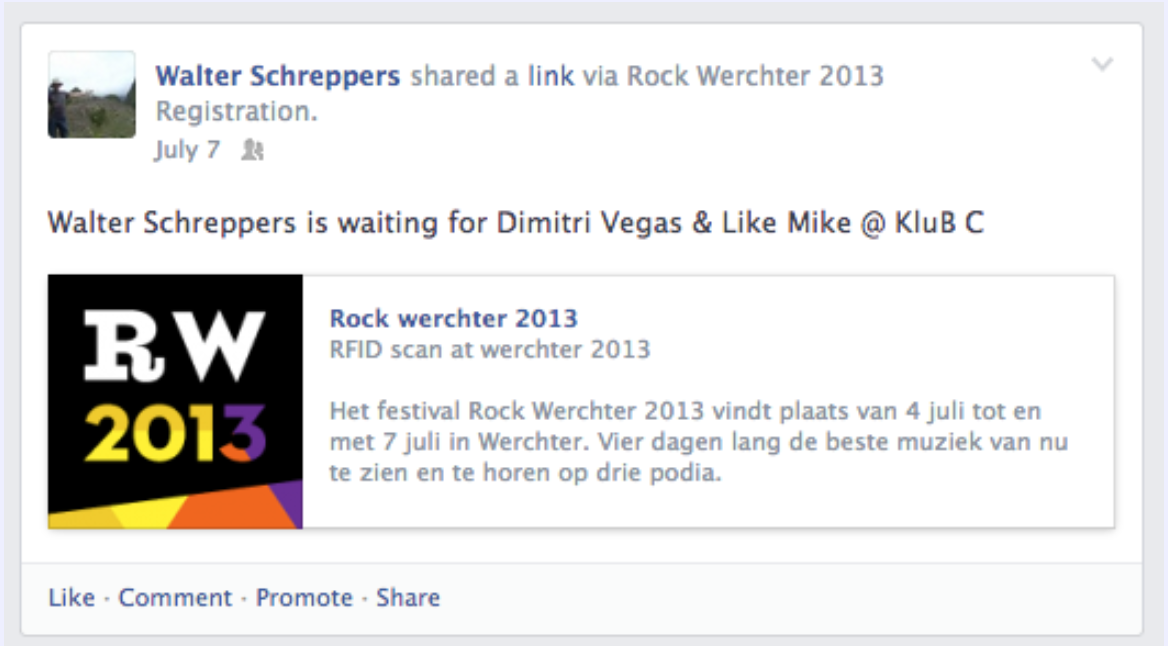 There are way more screens to be shown, like the tombola games, goodie sales. Also the touchscreens used to connect the rfid tags to facebook on the field etc. However I need to dig up some older backups to find those images again. And I'll probably won't bother as the project is in the past for me now and I've moved on.

Ow yes and ofcourse we had an admin page showing nice graphs with all the people that we're scanning themselves in the fields my employer wanted me to blurr the figures, rest assured it was more than thousands of scans each day (again screenshot from way back in 2013): 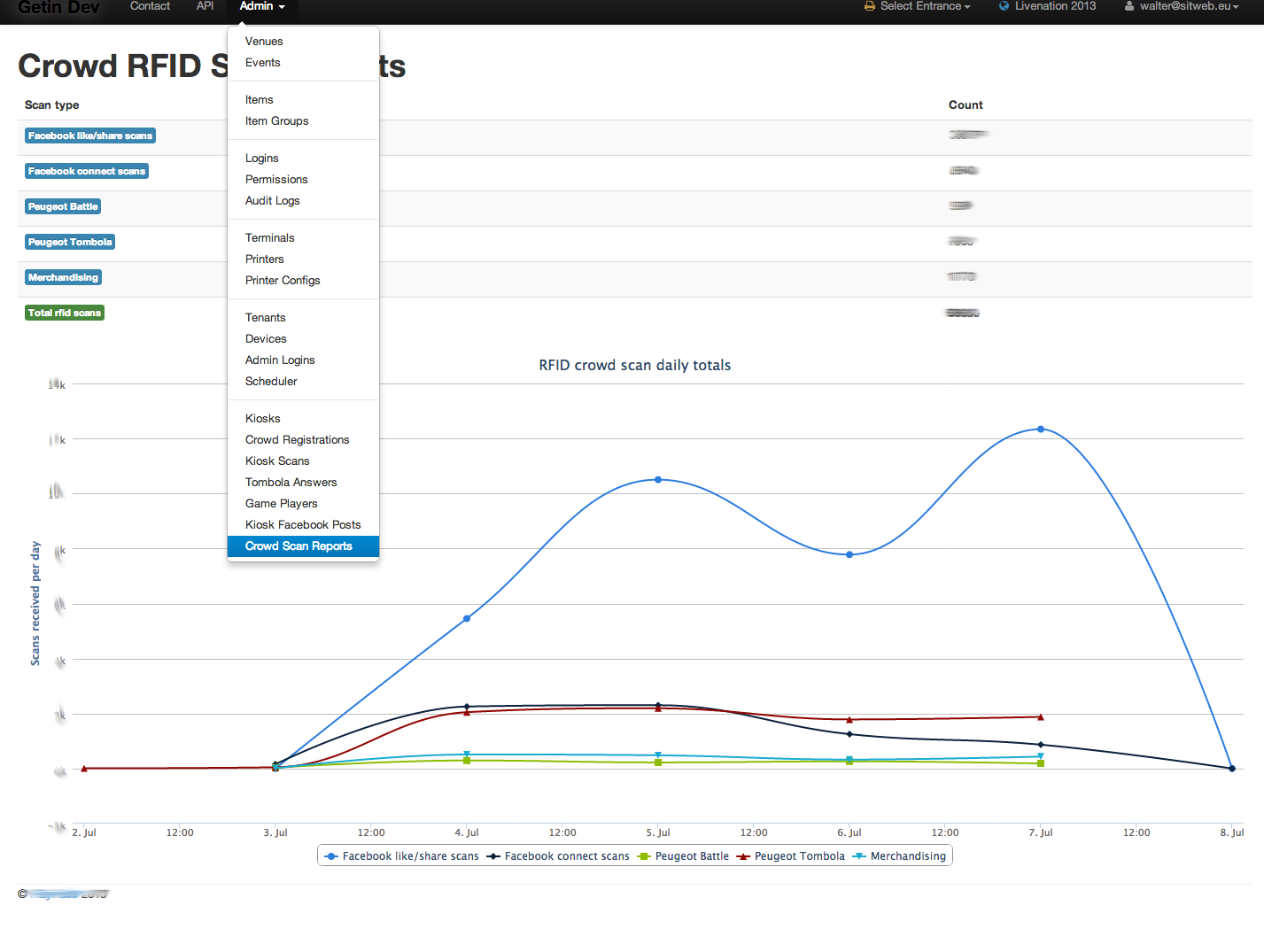 Here's again a summary of all the work done in the following months to get this up and running in chronological order as it was invoiced:

Here we had run it all in production on 2 major festivals and debugged all the issues while keeping most of it running. The next two months I only was allowed to work part time to make everything more stable and dynamic on the server side so they could more easily add games and different screens for the next festivals. Sure there were issues and lots of improvements to be made but it did work. Normally I'm way more of a perfectionist while writing software, properly testing everything etc. But doing that here in this context would have just resulted in not getting the deadline and having no brand activation available at all. This was just all getting it done first then move to the next feature. Not the normal way : getting it done, write tests to have good coverage, refactoring code to be cleaner, optimising and iterating as much as there is budget left to keep working.

So here the adventure with PlayPass ended for myself. As can be seen the last 2 months I only worked part time this was because they wanted to limit the development budget and could only allow me to continue if I invoiced approximately 40% less each month.

By then however we had survived the major festivals running our newly written software and it had all endured the festivals without going up in flames like it did before the rewrite of getin from php to rails. I'm pretty sure a whole lot could have been improved on the second part of my assignment there. But their budget just did not allow it at the time also.

Luckily I landed my next R&D contracting job almost instantly, thanks to a recruiting agency Computer Futures that got me a job interview at Rombit. Rombit was at that time also a tiny new startup in it's infacy. They needed someone like me to write a lot of software and that was also capable to create prototypes of hardware IOT devices and hired me on the spot.

PlayPass is doing well nowadays and even became a Gazelle (an award for being a quickly growing company). So the software we wrote with that small team of 4 developers in 2013 paid back it's developers cost at least in 100 fold already.

My next customer became Rombit