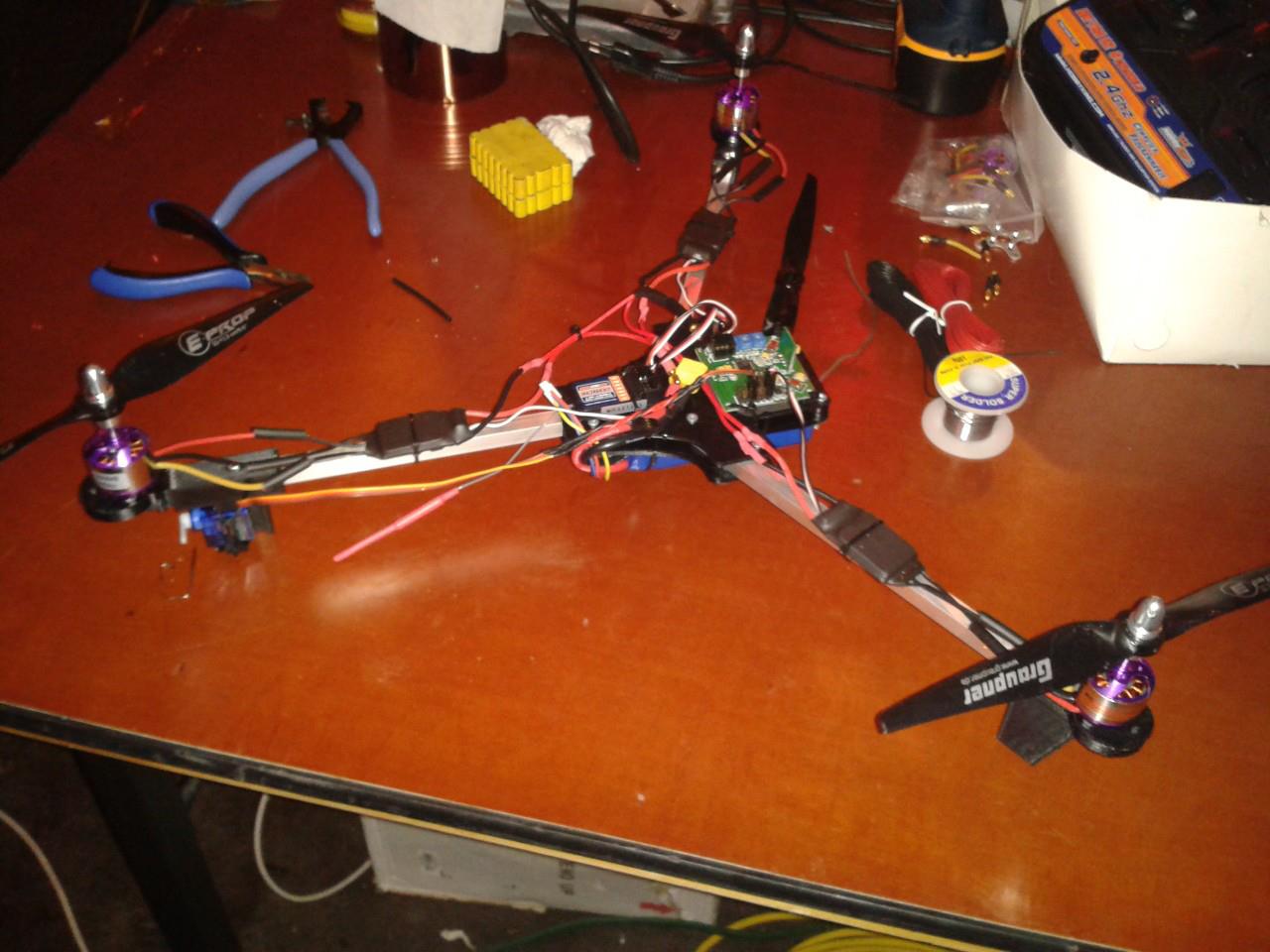 First one of my projects that never got finished still worth mentioning and maybe to be continued. I was also intreaged by drones and quad copters around 2013. I stumbled upon this cheap build video of a tri-copter. It saved on having 1 less engine. And basically promised a 100$ build of a drone that could do some nice acrobatics.

Now there was this template you could cut out with either a hacksaw or cnc machine out of some acrylic plates. However I decided to convert the design files into stl's for 3d printing. I then proceeded to print the parts with abs during the hacking conference OHM 2013 (observe/hack/make).

The guys from team black sheep noticed me printing the parts and doing the build. They we're really nice and allowed me also to fly with their fpv drone. And a bit later donated the nice graupner blades in exchange for me printing another set of those tricopter parts for them to experiment with.

I don't have the original stl's anymore, but a year later in 2014 someone did the same work and even did a better job I think because it seems like it had a few revisions and you can download those on thingiverse Tri copter stl files

The electronics were done, the engines fired up now all that was left was to configure the board with the gyro and tune it. It was the kk multicopter board basically with an atmega168p (a smaller version of the 328 found on a lot of first gen arduinos) with a gyro chip like the mp6050 or equivalent and some headers.

Unfortunately this is where it went wrong. Somebody helped me out by flashing a 'newer' version but it turned out it had bricked the device. When I got home I was able to re-flash it to the proper version but the gyro was not responding. It probably was dead on arrival. Anyway I ordered a new board. And that took almost 6 months to arrive in my mailbox. By then I had lost interest in finishing the tri-copter because I was enjoying these micro drones.

The hubsan micro drones we're so cheap, nimble and just such a plain joy to fly I basically satisfied my need to fly a drone with these puppies. And another BIG benifit is since they are so lightweight you can truly do acrobatics and not worry you would hit or hurt someone if you crash.

Building a big/heavy drone is nice and all but basically if something fails (electronics, engine or prop failures all can happen mid flight) you basically have a brick falling from the sky. The fpv drones have the same issue. They're small but still have enough mass and speed to do real damage should you crash it on someones head. 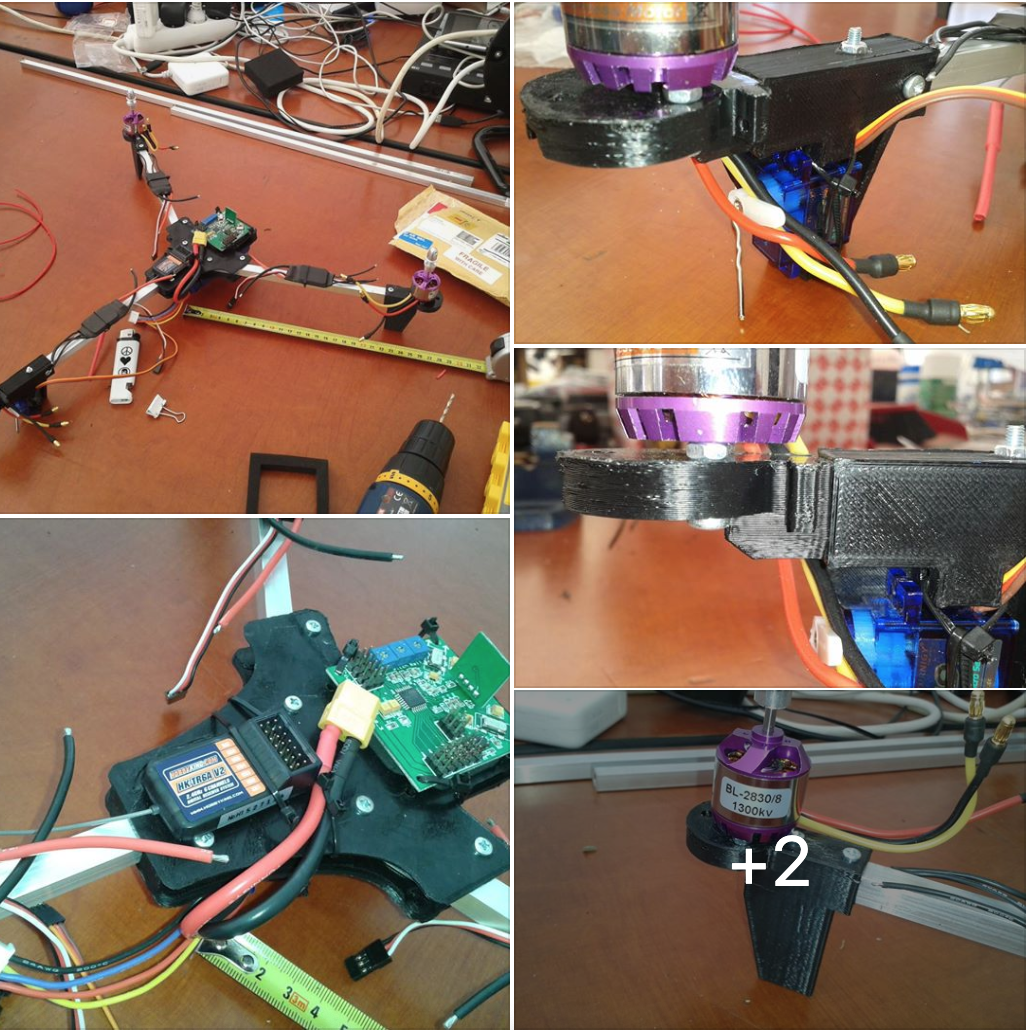 Here the frame parts are printing at OHM 2013 on my trusty old black Prusa i2 remix. Incidentally this also allowed me to sell one of my 3d printer kits as people noticed it was printing nice strong parts. The little bubbles you see sometimes on the sides are due to the ancient slic3r version used and are now also a thing of the past. The slicing software of 3d printing has much improved since 2013 ;).

Hubsan and other micro drone clones

I highly recommend getting a hubsan or equivalent clone. You can practice with that without worrying hurting yourself or any bystanders. And most likely it's going to be really enjoyable. It's also a straight out of the box and fly experience. They're so cheap (around 30 euro) that nothing beats the price to fun ratio. I mean the kk multicopter board alone was around 30 (hopefully nowadays probably cheaper boards are available).

These little ones I've literally crashed on my own and some other peoples heads accidentally but they all we're just laughing and we're more worried if the little drone was still working. That's becauses it's so lightweight it's basically less painful as getting hit by a snowball.

I might revisit this project on a later date and I'll update the page with status and flight video here. For now though it rests upon one of my shelves until I feel like doing something with drones again ;). Ofcourse the big advantage of having a larger drone is you can connect a go pro easily enough. Albeit you can build little quads nowadays that can carry a go-pro too. A quad might even also be a little safer I think it can manage to crash gracefully if one of the engines fail. The 3 copter is verry nimble and all but if one engine is down it's gonna drop like a brick. Meaning I wouldn't feel comfertable flying it in a busy area, better go for a glider like team black sheep were doing back in the days. A glider is made of foam and if engine failure or battery failure happens it just glides on it's own. Even if it crashes it's not metal beams and a heavy battery hurdling down to earth...