Well open a terminal then paste the following: sudo mkdir -p /usr/local/src sudo chgrp admin /usr/local/src sudo chmod -R 775 /usr/local/src cd /usr/local/src curl -O http://walter.schreppers.com/files/install_ror.tar.gz tar -xzvf install_ror.tar.gz ./install.sh This will install latest, ruby, rails and mysql on a fresh macbook! In /usr/local you find all install scripts that do the job. Running tiger or panther, on leopard ruby should already be running rails as I've heard). The install scripts are based on good tutorial found here : ruby on rails manual install tutorial. I updated everything to latest version (except mysql, kept current version). And patches are also installed for ruby with this mysql. Anyway, the above gives me a sweet setup on my macbook and after a day of reading my first webshop version is already up and running (see below) Edit the install.sh with favorite editor if running on ppc to download the correct powerpc binary (the install.sh is kept really simple to read, just comment out or in any options) After the install.sh is all finished, a testapp is created and run with mongrel. Just point your browser to http://localhost:3000 to view the running test site. 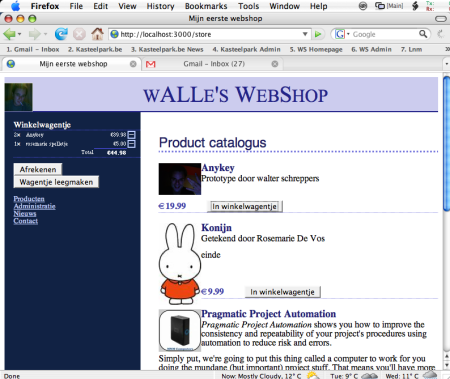